Support us through Amazon Smile and selecting FHL as your charity. Click below to be taken directly there.

For Haiti With Love supervises and finances construction projects to make the lives of the people of Haiti better.

Homes for the homeless

Talk to Don DeHart and he will share with you that one of the greatest joys of his life is to present the keys of a new home to a homeless family.

So often the families are living under a tree, sleeping in a marketplace at night, or have been scattered about the city sleeping in homes of relatives. Some are patients who have come to the FHL 24-hour emergency medical clinic for burns, who have just lost everything in the burning of their home. To keep their families together under one roof, in a dry place they can call home, where they know no one can kick them out or make them move? The expressions on the faces of those families accepting the keys lasts in your heart forever. 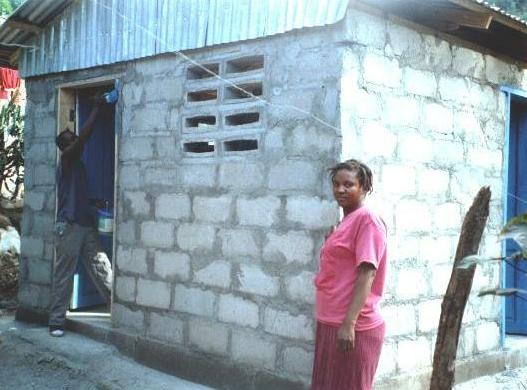 This home was financed by The Pilgrim Lutheran Church of Indianapolis, Indiana. It was built, dedicated to the Lord and given free of charge to a homeless family all in August 1998.

Most Haitians can come up with a little land, they have inherited it as a part of their parent's land, but will never be able to put together the money to build. Their land plus volunteer labor plus your gifts for materials = home. A nice concrete block home with concrete floor, wood trusses and corrugated metal roof. These are great group projects, you can provide a home for $6,000 U.S.D 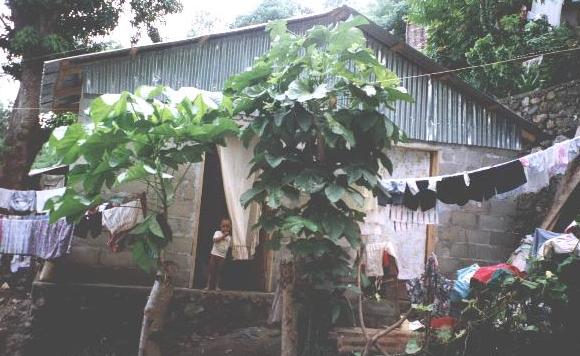 When you build a home on the side of a mountain in Haiti, it is a real challenge finding an angle to get a photo.

For Haiti with Love, through generous donations, dedicated four homes in 1998.

Marketplaces are one area of the construction in the North of Haiti by For Haiti with Love.

Benefits of a New Marketplace:

A new market gets the goods up out of the mud and dirt and on to a concrete slab for better hygiene.

Like a new mall in the states, the word gets out and people come from much farther away to take part in the new market with the grand opening/dedication day usually setting a whole new trend for marketing in the area. Everyone benefits.

When the project is complete, there are now trained masons and carpenters in the village who have worked on each unit.

The village people have had their first practical lesson in democracy. They see by example what they can accomplish by working together, pooling their money and talents. They can get what they need in the future!

By building within the cultural needs, at their request and with them being involved even before the project starts, it is their marketplace, their project. They will take care of it, keep it clean and maintained and it is their accomplishment.

The last thing done before the dedication and For Haiti with Love leaving the village is to put up a sign that designates (in French) that this is a market for the village, built by the village people, financed through For Haiti with Love, TO THE GLORY OF GOD! Follow-up with the villages has proven growth in every church in the area. They want to get to know this God who provided for them such a wonderful new marketplace.

It all came about during a meeting where we stressed that we are not in Haiti to change their culture, but to help improve their daily lives, just to make it better.

To this end, we did a random survey of different villages asking them, "if we were to come to your village to do a community project for you, what project would you find most beneficial?" Without exception they said if they could have anything they wanted, it would be a new market.

We asked them to explain why and the response went something like this: Every village has a central place where the village people as well as people in the area (that means for miles around) go to barter, buy and sell. Most of the village markets are unplanned, just kind of happen on market day as the ladies come and put sticks in the ground, cover it with a sheet and set up their shops for the day.

In looking at the markets in several villages of the North we found that they were usually in lowlands which meant that after or during rains they were muddy, dirty, and just nasty. The first market we did was one building at a time in the village of Pilate. It was too crowded and though it had roofs, they never got around to putting down a floor. This is very typically Haitian, first you cover then if you have the money you put in a floor - last.

After this expensive experience, Don went to the next village which was Terrier Rouge and first set up a Village Market Committee. The Committee had a representative from each major group in the village, but no pastors. The Committee was asked to select a Treasurer, they chose the local Priest. Then democracy was explained. They were to gather the townspeople to come to an agreement on location (they supply the site) and then to decide who would finance the project and who would do the labor. If they couldn't afford to make a contribution to the project in money, they were to agree to do it in time so it was a project that belonged to everyone. As they "taxed" themselves, they gave the money to their Treasurer. It was to be used to pay the masons and carpenters, others are "volunteers."

For Haiti with Love, inc. supplies the site plans, the expertise and supervision, cement, lumber, nails and sheet metal roofing. The local people hauled sand and gravel from the river and supplied the water and labor. If the market is to be constructed on the site of the old one, everything comes down to start fresh. Once the site is cleared it is laid out for the new 20' x 40' pavilions, leveled, forms set for the first concrete floor, rebar put in place for pillars that go up later and the local men are being taught a trade as the open-air buildings go up. The number of units depends on the size of the village and cost a little over $5,000US each for materials to construct. These make great projects for stateside churches and groups to fund! One unit or a whole village! 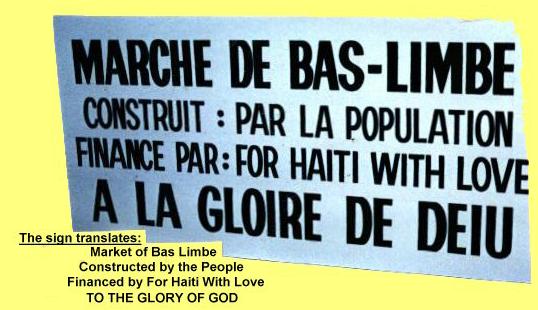 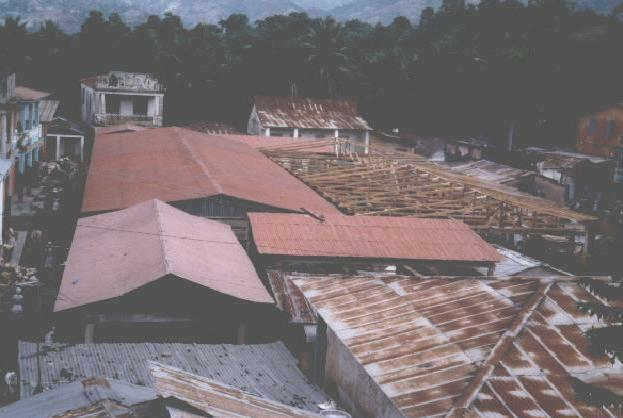 The first marketplace project was in the mountain village of Pilate. Since it was their only available space for a market, and since the entire area relied on it, market could not close. We therefore built larger by going outside an existing building and once under roof the old was torn down.

This project was done before we were full time, so the money was taken down and a trusted lawyer in the town managed the project. It was quite large, but serves the people of this area well.